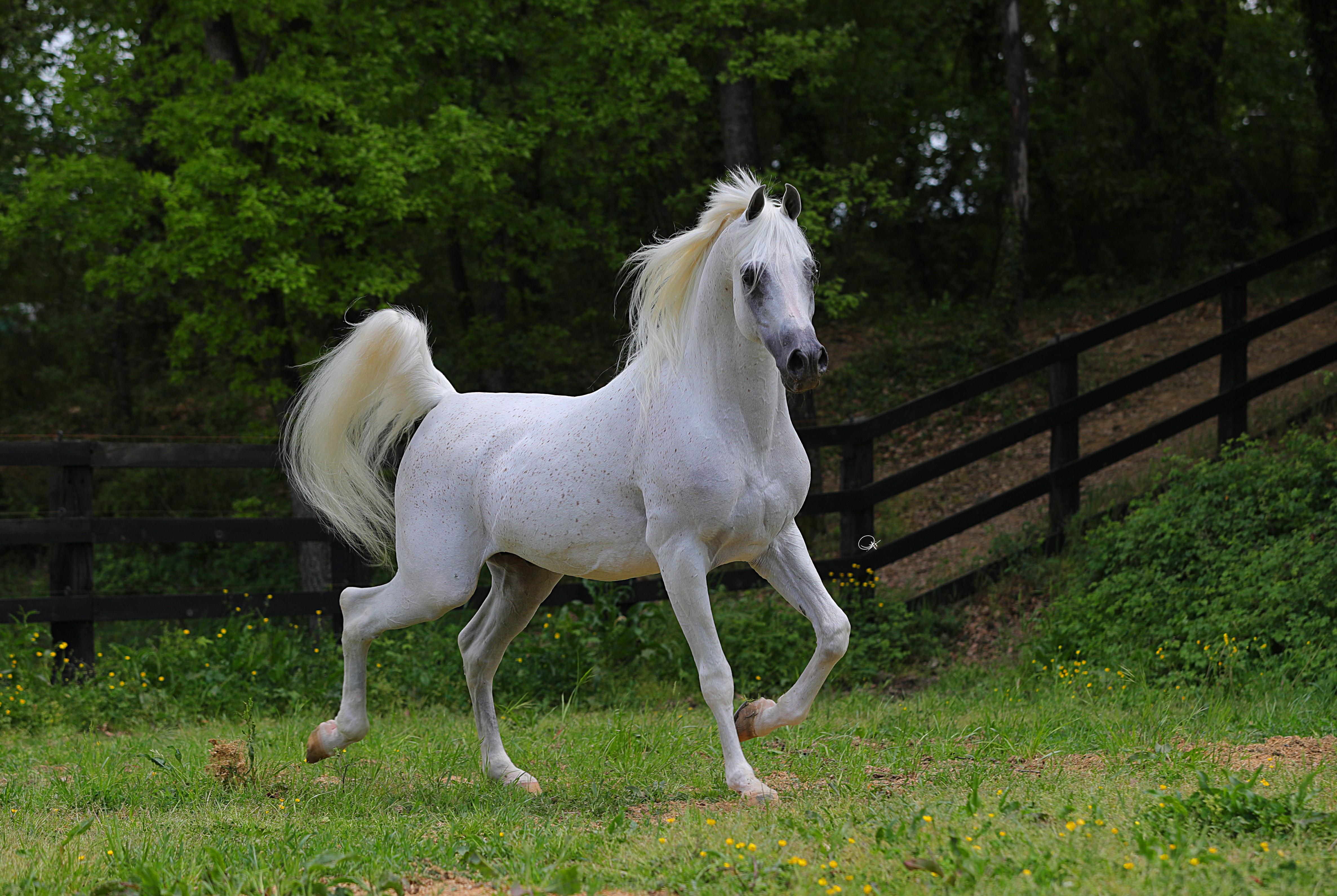 SHAEL DREAM DESERT is a dream horse. Giacomo Capacci Arabians farm team is very proud to have him at their farm in Cortona, Italy for the 2017-2018 breeding season. He is pearl-grey, typey and incredibly Arabian beautiful. His temperament is mind-boggling. One can hardly ever see a stallion as gentle and as placid as Shael Dream Desert, all without losing a bit of any of the traits every breeder wants in a stallion. He is extremely magnetic and always the perfect gentleman, so elegant and majestic when he strikes the pose… In Giacomo Capacci’s view he could be what every European breeder needs on to their breeding program. The opportunity of a complete outcross and amazing type source. He was born in Italy in 2001 by the Egyptian-bred Ansata Shaamis (Ansata Halim Shah x AK Faressa by Prince FA Moniet) and out of Elettra (Hadidi x Afrodite by Andoy and out of Papele who, in her turn, is by Prizrak and out of Parijanka). Shael Dream Desert has therefore come into being as an extraordinary blend of powerful Straight Egyptian, Crabbet, Polish and Russian blood lines. Born in 1994 in the USA, Ansata Shaamis is a grey straight Egyptian stallion belonging to the Saklawi Jedran Ibn Sudan strain, the Moniet El Nefous branch, the Mouna family, and to the Roga El Beida dam line. He is bred by Mr. and Mrs. Donald L. Forbis, in the USA and owned by Haras Cruzeiro Farm in Brazil.Yet, when looking even more closely at Ansata Shaamis’ pedigree, one can realize how this sire has endowed Shael Dream Desert with one of the greatest gift a father could ever give a son in breeding engineering: one of the most ancient and prestigious sire lines dating back to the legendary and champion producer of all times, the stallion Nazeer. Shael Dream Desert’s dam is Elettra, a wonderful Russian bred grey mare born in 1995 with a strong Egyptian influence through Aswan. In 1996 Elettra was Champion Filly at the Reggio Emilia International Show and Reserve Champion at the Città di Castello International Show. That year, she won her class at the Italian National Championships in Rome. She was Champion Filly at the Biella International Show in 1997, and two years later was Top Five at the European Championships in Verona. Elettra is the daughter of Paris World Champion and multi-awarded Hadidi (1990), a grey straight Egyptian Arabian stallion of striking presence and conformation whose powerful genes have been infused by some of the most remarkable straight Egyptian stallions in history such as the grey Norus (1984), the black Gharib (1965) back to his great-grandsire, the unforgettable chestnut Anter (1946). The latter was a son of Hamdan, a full brother to Shaloul, who together with their full sister, Samira, were part of the group which Judi Forbis' called ‘THE FABULOUS FOUR’. These horses were sired by Ibn Rabdan and out of the mare Bint Radia, whose mother, Radia, was not only an important mare for the Royal Agricultural Society but also for the Inshass Stud of King Farouk. Elettra’s mother is the Pure Russian bay mare Afrodite (1991), today one of the founding mares standing at Bigotti Barbara’s breeding farm in Italy. She is sired by Andoy x Papele out of Parijanka by Aswan x Prekrasnaja, who all have been authentic Russian pearls in breeding industry of past times. In light of this, what could we ever obtain from merging the historic strata of straight Egyptian exquisiteness and genetic power with the sportivity and the soundness of the great Russian bloodlines? The answer to this question can only be Shael Dream Desert! For all stallions, honors and titles are certainly a measure of success, but it is in producing the next generation that a stallion’s mettle is taken. Shael Dream Desert’s foals record is just unbelievable. To date, it shows something like 166 foals overall! Knowledgeable breeders from around the globe have chosen Shael Dream Desert to elevate their programs, and he has not disappointed. As a sire, Shael Dream Desert holds his own in international competition. FT Shaella, owned by Dubai Stud, boasts an impressive show titles evidence. She has just been crowned 2017 Gold Champion Mare at the Dubai Int. Arabian Horses Championship; 2013 Bronze Champion - Dubai International Championship, Dubai; Gold Champion - Prince Sultan Festival, Saudi Arabia; 2012 Silver Champion - World Championships, Paris; Silver Champion - Abu Dhabi Int. UAE; Silver Champion - Dubai Int, UAE; Gold Champion, Best head - Menton, France; Unanimous Gold Champion, Best Female & highest score - Italian Class A Show, Cattolica, Italy; Gold Champion, class winner - All Nations Cup, Aachen; 2011 Silver Champion - Dubai, UAE; 2010 Silver Champion mare - Ajman, UAE; Gold Champion - Dubai Int. UAE; Silver Champion - Menton, France; Gold Champion - Aachen, Germany; Gold Champion - Paris, France; 2009 Gold Champion & Sheikh Zayed Award - Abu Dhabi Nat, UAE; 2008 Junior Female Champion - Città Di Castello, Italy; Bronze Champion - World Championship, Paris. Felicia RLC, owned by Ajman Stud, in Las Vegas was named Reserve Champion Junior Filly; Van Katalina was National Supreme Champion Mare in Argentina; Shannan El Madan was World Bronze Medal in Paris plus many others…More recently, the striking success of his grand-daughter, the gorgeous grey D Shahla (MARAJJ x FT Shaella) who was crowned Gold Champion Junior Filly at  the 2015 Paris World Championship did not but confirm Shael Dream Desert’s proven ability when it comes to first class genetic power. In early 2017, this big boy made his return to Italy from Saudi Arabia and he is now standing at Giacomo Capacci Arabians for the 2017 and 2018 breeding season!
2018-02-14
Previous Post: Dudai Stud Open Day 2017
Next Post: Wadee Al Shaqab