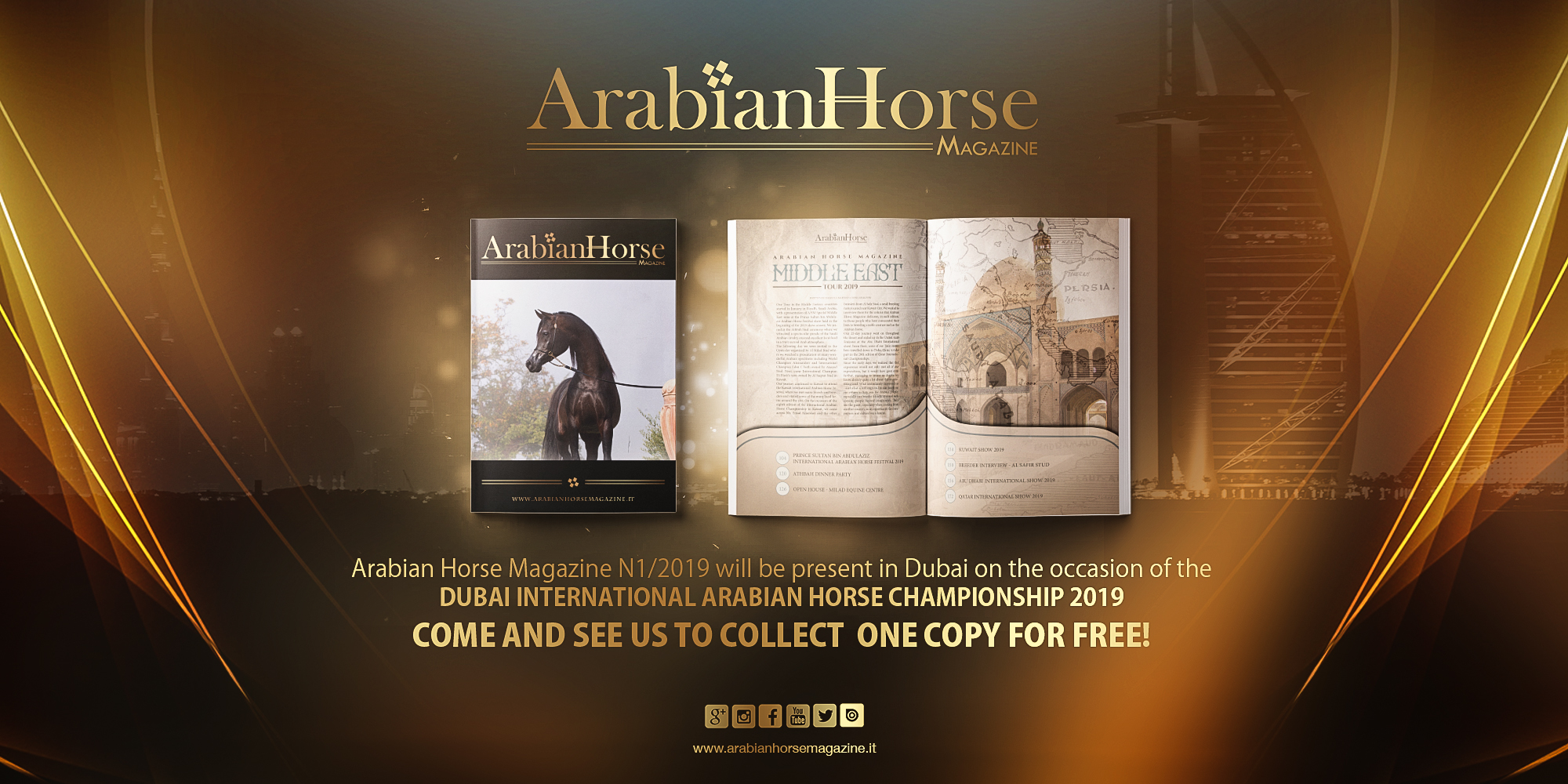 Dear Readers, Behind the Arabian horse there is a boundless world of free time, sport, competition, love for a companion that every day teaches us about passionate living and lifelong learning with an energy that is unknown to other disciplines. The year that we have just left behind confirmed the dynamism of this scenario which, despite the economic and bureaucratic difficulties, still moves forward an important sector for all of us in this community. At very heart of this edition is our 2019 Tour in the Middle Eastern countries, a 25-day journey that really catapulted us into the motherland of the Arabian Horse. We took part in the Prince Sultan bin Abdulaziz Arabian Horse Festival held in Riyadh, Saudi Arabia, at the beginning of the 2019 show-season; we were invited to Athbah’s party and to the Open day organized by Al Milad Stud where we watched a presentation of many wonderful Arabian specimens; we joined in the Kuwait International Arabian Horse Festival where we met several friends and breeders and visited some of the many local farms around the city to end up in the United Arab Emirates to attend the Abu Dhabi International Arabian Horse Championship. A magnificent experience that made us learn even more about Arabian horses - where they come from and where they acquired all their appreciated virtues. This edition outlines how noble farms and important stables - Dubai Arabian Horse Stud, Al Saqran, Al Milad, Abhaa Arabians, but also many passionate private breeders from all over the world are indefatigably devoted to this breed, either as a legacy of past times or as a breeding animal to be developed and safeguarded, giving him an imprint in accordance with his type, just as the ancient Bedouins used to do. We had the chance to interview for the very first time Mr. Emad Alkandary, President and owner of Al Safir Stud, Kuwait, and Mr. Abdul Rahman Mohamed Sharif Al Baidhaei, Chairman of ARMS Group and owner of the award-winning breeding and equestrian company Al Jawaher Stud in the UAE. Two smart businessmen and visionary breeders that are carrying forward two very successful breeding programs, each in their own way, drawing upon the very best the Arabian horse industry has given to humankind through time. We met and interviewed judge Renata Schibler, handler Andreas Birkenseer, Tony Bauwens and his girlfriend Kelly Delen, both handlers and protagonists of the Riding Couple section. As always, we have included articles about some of the best contemporary representatives of the breed: QR Marc, Expressivo KA, Kanz Albidayer, Dominic M, the beautiful D Shihanah from Dubai Horse Stud and the ultra-gorgeous Exxaltress from Orrions Farm, US. A touch of glamor has been added to the Magazine by introducing the ‘Fashion Hub’, a new section dedicated to the ones whose big love for the Arabian horse led them to designing amazing outfits for horse riders at a later stage of their career in this industry. Tatiana Coffman and her extraordinary creations are a clear expression of this new artistic tendency. A new development of the Magazine is also a fantastic photo gallery aimed at further showcasing the ‘beauty’ of the Arabian horse. The shots proposed by Glenn Jacobs, Alessio Azzali, Gregor Aymar, Javan Shaller and Nawaf Al Johani immortalize, so to say, that inner spiritual dimension of the Arabian horse that often remains invisible to the inexpert eye and that only photography can convey at its best. Therefore, it is not surprising that there exist out there many ways of pursuing and implementing the commitment to the Arabian breed as a whole. However, these different ways share a common denominator, a deep love that binds us altogether and comes back to us as a healing therapy. Such a therapy gets to us by itself, prescribed by the heart and fuelled by passion as it were. Here, doctor's prescription is not needed.
2019-03-25
Previous Post: European Championship Verona 2017
Next Post: Dubai 2018