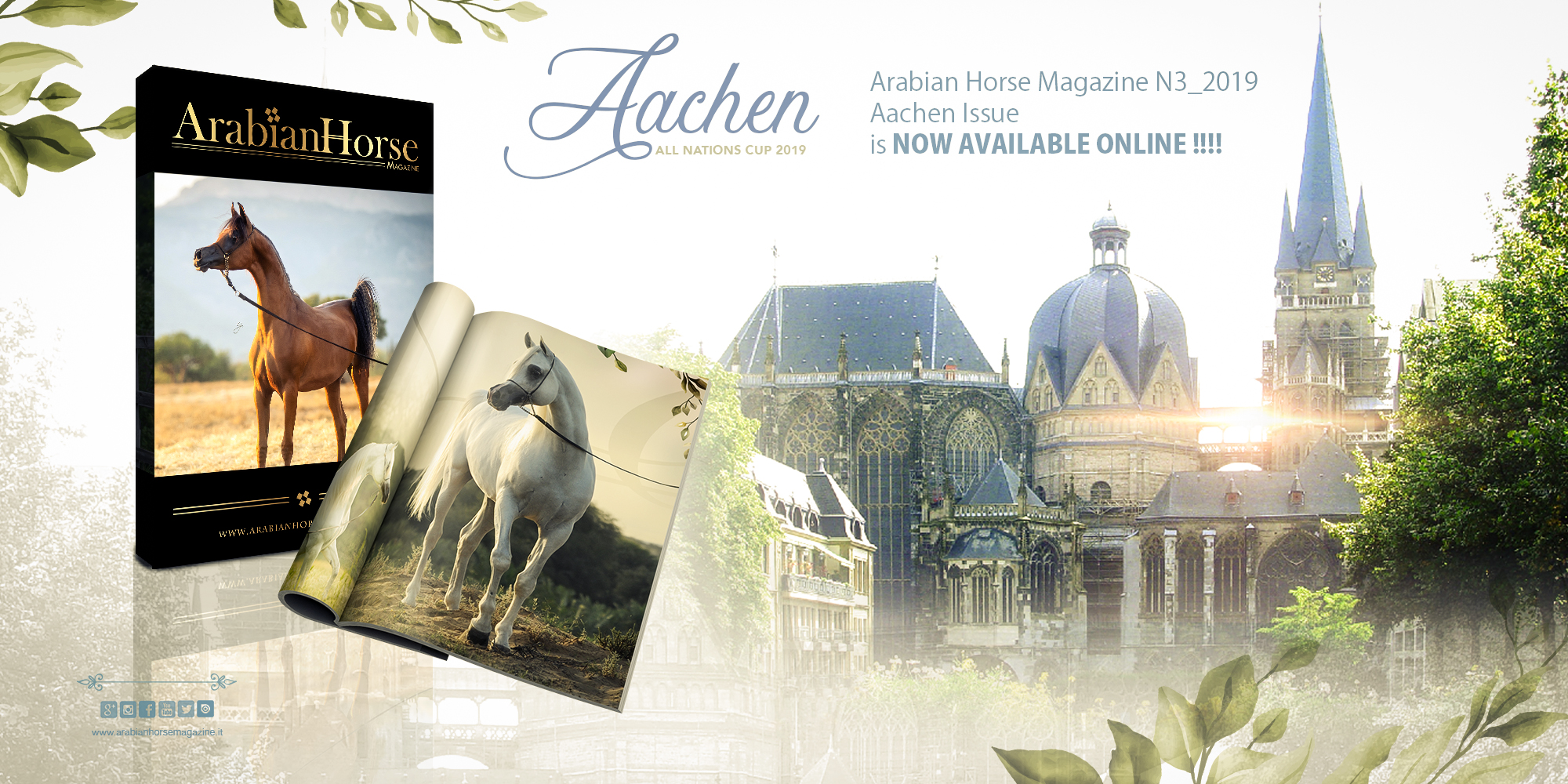 Make sure not to miss out the 2019 Aachen issue of Arabian Horse Magazine as it will bring you right at the very heart of the Arabian horse realm and its incredible desert stories. We will delve into the lives of some of the finest icons of the breed with the likes of European Triple Crown Winner AJA Justified (WH Justice × Aja Beneja by FS Bengali); the multi-champion mare Baviera HVP (Marwan Al Shaqab x HB Bessolea); the 3 years old colt DAA Nairobi (Hariry Al Shaqab x AJ Nadira); and the handsome Enotri EEA (Shanghai EA x Enjoi E). We have included a very nice presentation of the horses being trained at Capecci Training Center, Italy, run by Paolo, his wife Susy Gurschler and Giampaolo Gubbiotti. Their Open Day was particularly interesting this year as we had a real chance to get to know by close beautiful and well trained Arabians, very well moved and elegantly presented. In the same vein, we devoted pages to Elegantica Training Centre, Italy, owned and managed by the fantastic duo formed by Enrico and Nicola Mearelli. You will also find a celebrating section on the 2019 Champions of Abhaa Arabians, one of the most interesting breeding program in Kuwait, Saudi Arabia. Likewise, we felt to praise more the Arabian horses from Al Jawaher Stud, a newly-established breeding program in Dubai, run by the visionary Mr. Abdul Rahman Mohamed Sharif Al Baidhaei. For this edition, we have had the pleasure to interview Belgian breeder Maikee Serden as she is the owner of Arabian Obsession, a solid and coherent breeding program of Arabian horses that are naturally beautiful and correct. We have also involved handler Arthur Nascimento from Brazil; judge Martine Van Hee from Belgium; painter Terry Crowley from Michigan; the Riding Couple formed by Morgan Moore and Ryan Patrick from Texas; last but not least, Angela King from Spirit Horse Design in East Tennessee and US models Morgan Moore and Kelle Deeter. Although in different ways and for different ends, these characters all share one common denominator: the love for the Arabian horse. Following the success of previous editions, once again for Aachen 2019 - a returns by public demand to the Art of Photography, a picture gallery showing a few glimpses of exciting shots made by Hamid Shokouhi, Maria Itina, Tina Thuell, Emma van Veldhuisen, Lisa Dijk, Lisa Kurtz, Ekaterina Druz and Annika Seiler. So far, the Team of Arabian Horse Magazine has been working on the main shows of the Italian Show Tour 2019, which is more than half way through its course. We drove to Ottaviano, in the province of Naples, for the Vesuvius Trophy 2019 – European C-show; then we flew up to Central Italy for the Summer Show in Montefalco 2019, to end up in the North in the city of Bergamo hosting the Purebred Arabians B- International Show 2019. From its part, the international show scenery has offered to the enthusiasts of the breed many opportunities to catch up with long-term friends, be they breeders, judges, handlers, trainers or simply lovers the chance to start new acquaintances on the main shows and to exchange ideas about the latest trends in the industry of the Arabian horse in Europe, in the U.S. and in the Middle East. Reason for which, we included some bits of the most important international competitions we had on schedule: the 2019 Championship of Arabian Horses in the Mediterranean and Arabian Countries in Menton on the French Riviera; the Prague InterCup 2019; the International Days for Arabian Horses in Ströhen; the AVS - Eurozone Cup C- European Show, Netherlands; the 2019 Egyptian Event Europe at Castle ‘Löwenstein’ in Kleinheubach near Frankfurt, Germany; to conclude with the Al Khalediah European Arabian Horse Festival in Poland around the middle of the month of August. Guided by our ‘educational concept’, we keep devoting plenty of room to the study of the most important Straight Egyptian bloodlines thanks to Domenico Tocchi who wrote the second chapter about supreme broodmare El Dahma and the Farida’s Family; while William Richardot de Choisey allowed us to access his precious personal archives and get a hold of unreleased material on the Orientalist Art. Illustrations and photos have been beautifully chosen by us to immortalize the ‘people’ who live around Arabian horses and who, because of them, have found the meaning of their life. A few ending lines to inform you that we will all be at the forthcoming show in Aachen. We expect you to come around to get to know each other by close and grab a copy of our beautiful publication.
2019-09-30
Previous Post: Al Khalediah 2019
Next Post: Prague Intercup 2019