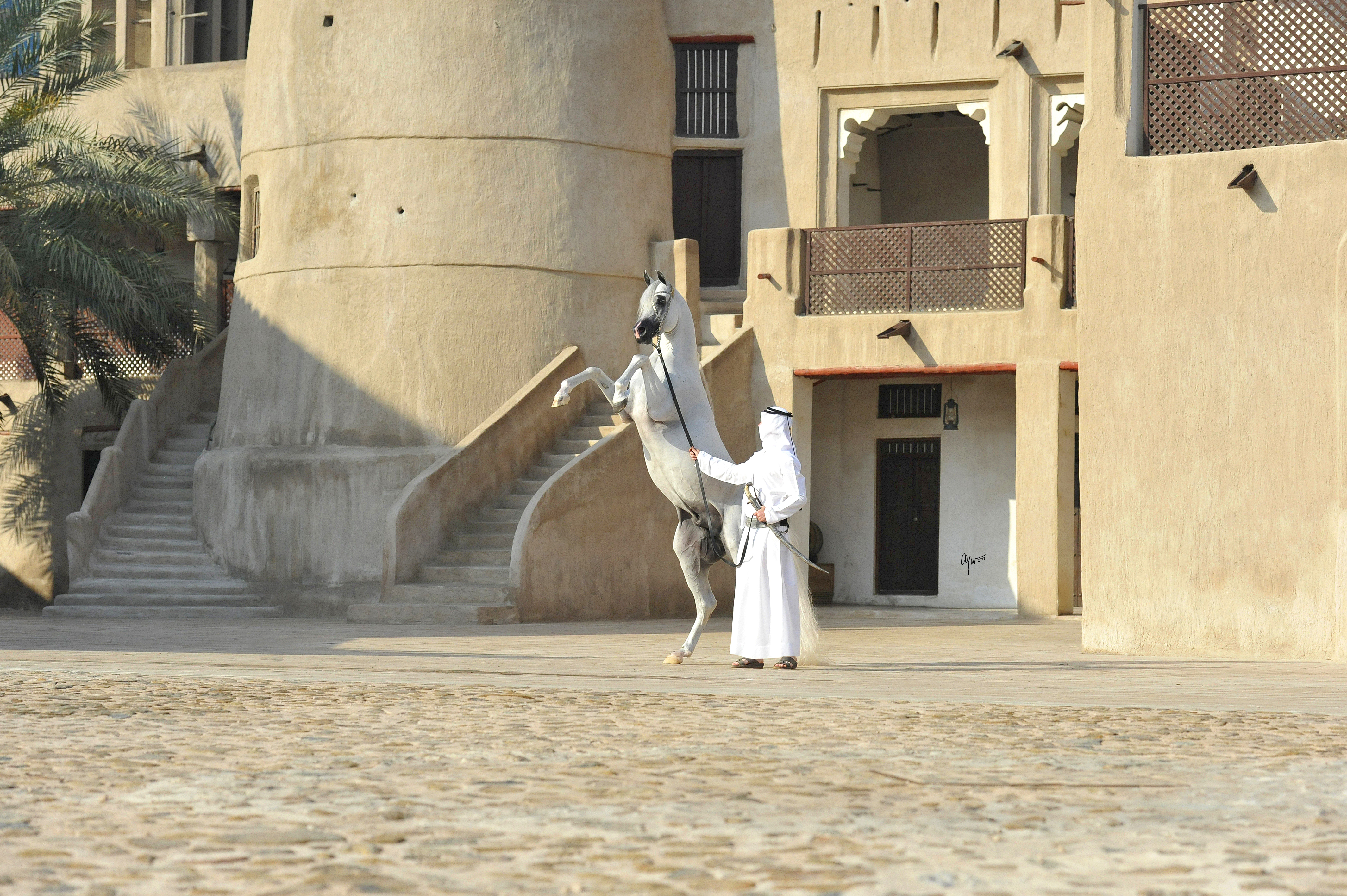 A Magic Name for a Magic Horse

An ancient legend narrates that Excalibur was the magical sword of King Arthur associated with the rightful sovereign. The magic of the Sword is still alive today in different ways. It has conquered the desert in form of the shimmering white stallion named Excalibur EA. Owned by Princess Laetitia d’Arenberg, Excalibur EA has accomplished the great goal of becoming the European Triple Crown Champion 2014, winning the Aachen Championship, the European Championship and the Paris World Championship. His father, Shanghai EA won several international awards and he almost achieved the same glorious goal of a Triple Crown. In 2011 he won the silver in Paris and he repeated the second place in 2013 in Aachen and in Paris. The same year he conquered the Gold Medal at the European Championships. However, that was not enough to win the Triple Crown and we all had to wait 2014 to admire Excalibur’s triple victory. Excalibur’s dam line makes of this horse an extraordinary rare specimen. While his type and charisma are clearly marks of WH Justice’s influence, his mother Essence of Marwan has given Excalibur EA his athletic body, his almost perfect legs and a really unique movement, making of him an extraordinarily well balanced and astoundingly captivating horse. Essence of Marwan is a chestnut daughter of the legendary Marwan Al Shaqab out of Elizja by Esta-Ghalil, infusing the pedigree with more Polish and Spanish influence. Excalibur EA made his debut at the Sharjah Arabian Show, achieving the second place in his class. In the United States, he conquered the US National Champion Yearling Colt Title. For a long time Olivia Strauch, the manager of Las Rosas Arabians in Uruguay, the farm owned by Princess Laetitia d’ Arenberg, had been searching for a breeding horse to increase the stud’s quality. Since Excalibur EA had won the US National they have been following his path. In 2013, a week before the Scottsdale show, Princess Laetitia and her farm manager Olivia Strauch arranged a visit to the Ted Carson’s Butler Farm Stalls at the Scottsdale show grounds in the USA where Excalibur was being trained. The young stallion revealed himself at his best, leaving the visitors simply daunted. Princess Laetitia and Olivia already imagined a future with Excalibur EA at the farm in Uruguay and decided to buy him before the show. Excalibur against strong contenders was named Scottsdale International Arabian Breeders Classic Two Year Old Champion Colt, giving the first great satisfaction to Las Rosas Arabians. Just two months after Excalibur competed in Las Vegas for Uruguay and confirmed his supremacy. He was named Silver Supreme Junior Stallion indeed. Princess Laetitia and her manager have perfectly planned and orchestrated Excalibur’s career. After a demanding show season the young stallion finally went back to Uruguay where he relaxed and began to breed the mares of his own new Stud. In the first year Excalibur bred 24 mares giving impressive results: the new born foals were all strong in type, movement and charisma. Excalibur met the European reality for the first time at Menton 2014 Show, where the competition level was very high: there he was third in class. After that first appearance the horse began his incredible show season winning the Gold at Strohen, the Gold at West Coast and the Gold in Aachen. Nobody will forget the exceptional score of 95.33 gained in Aachen, the highest score ever given in an Ecaho show ever. His successful year went on with a Gold Medal at the European Championships concluding with the title of World Champion in Paris. Excalibur EA has continued his global success story and achieved the 2017 Abu Dhabi International Unanimous Gold Champion Senior Stallion title and just one month later he was Gold Champion Stallion at the 2017 Dubai International Arabian Horse Championship. The fame of this World Champion will last forever in the Arabian horse history and the myth of Excalibur EA will always live through his offspring, in particular, the handsome grey colt EXXALT born in 2014 (out of the bay mare Vesperra by SF Veraz) and owned by the Exxalt Partnership U.S. and the amazing grey colt ALEXXANDER born in 2014 (out of the refined grey mare AR Most Irresistible by ML Mostly Padron) and owned by Alsayed Stud in Saudi Arabia. These two horses are exceptional on their own and have already proved to be great champions and worthy successors of their fabulous sire. Excalibur EA has recently made his return to Europe. He is now standing at Paolo Capecci’s Training Center and, exactly with Paolo, he will be competing on the 2017 edition of the show in Menton. Moreover, Mr. Woody Gubbiotti will be dealing with the stallion’s promotion while Mrs. Susy Gruschler will be taking care of him supporting Excalibur in all his daily activities. A few ending lines to give right honor to the owner of this magnificent Arabian specimen: Mr. Bassam Al Saqran Stud of Al Saqran Stud. Bassam is before anything a man of passion. Among his horses at Al Saqran Stud he has no favorites. Just like a father who is not able to give preferential treatment to any of his children, so isn’t Bassam with his horses. He loves them all with the same intensity, but, time, we think, has come for Mr. Bessam to have a special thought about Excalibur EA competing on the much-awaited show in Menton!
2017-12-18
Previous Post: Psytadel
Next Post: 6° Purosangue Arabi a Bergamo