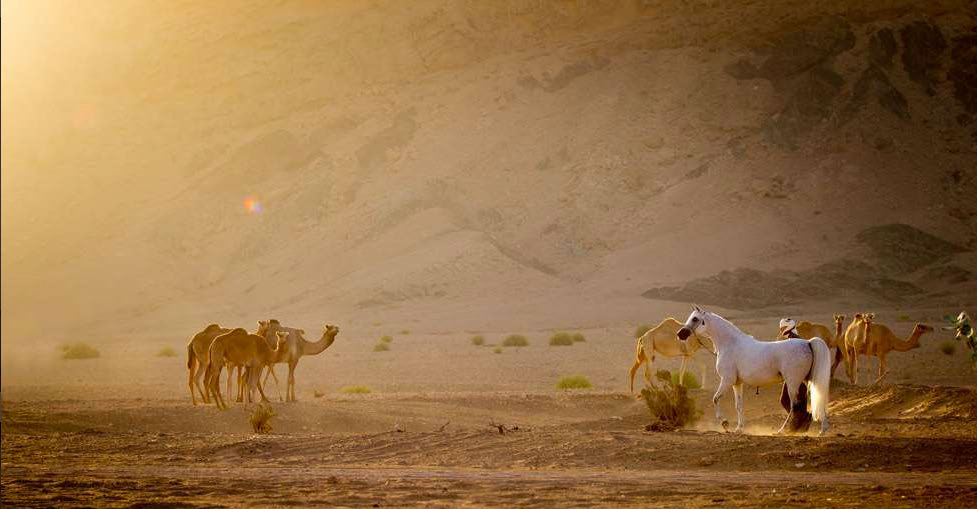 On the 19th of March 2017, late in the afternoon, we flew to one of the world most beautiful places where you can find some of the finest Arabian Horses. This place is the amazing Stable of Al Zobair. The team of Micheal Van Den Elsken and Margot Chazel arranged a wonderful evening with nice food, great music and a lovely atmosphere – accompanied by a presentation of some of the most beautiful Arabian Horses in the world. Early in the evening, we saw some of the straight Egyptian foals by Egaab Al Rayyan, a very refined stallion going back to Ansata Nile Echo. There was the white mare Tamima Al Zobair out of Tammam Albadeia going back to Simeon Sharav and her grey filly foal by Egaab Al Rayyan, Maryanah Al Zobair by Al Mamunah going back to Maysoun and her grey colt by Egaab and a half-sister to Maryanah, the beautiful Bint Al Mamunah Al Zobair by nothing else than Al Adeed Al Shaqab and her grey filly by Egaab. It was stunning to see an exceptional foal crop by the amazing Cavalli, DA Valentino son out of Aspyn a daughter of Padron Psyche. He covered for sure some of the most beautiful mares and we saw some very promising babies like the beautiful Ammoriah Al Zobair a daughter of the incredible producer S.M.A. Magic One and she proved that the Magic One’s daughters are fabulous producers too, just like her half-sister Taghreed Al Zobair with her grey filly by Cavalli. They presented to the public also a wonderful white mare. her name is Nesj El Khidonna and she impressed us with a very pretty filly also her by Cavalli. We were lucky to see also a daughter of the very special mare Tehama Bllalina that was named Silver World Champion mare in Paris 2016; her daughter whose name is Belbelah Al Zobair is also by Magic One and she was presented with a very elegant filly by Cavalli on her side. During that evening, there were many highights but a very special one was that when we saw once more the World Gold Champion mare Salwa Al Zobair who in my opinion is getting more beautiful every year. On her side, there was a little bay filly and she nothing else than a daughter of the well-known and highly appreciated FA El Rasheem. There was presented also another very beautiful daughter of Salwa. Her name is Jareen Al Zobair by S.M.A. Magic One, also this an exceptional cross. We got to see also some pearls form Al Zobair and one of them is the Polish beauty Pistoria and it’s every time a pleasure to see her and the two Klass daughters, Klassical Presence MI and Klassical Devotion MI, both very special mares. At the end of this very nice evening we got to see the temporal sire of Al Zobair - Fakhr Al Khalidiah by World Champion Marquis Cahr and Barah Al Khalediah. We like to tell thank you to the whole team of Al Zobair. It was a wonderful event and a special thank you to his Highness Sheikh Abdulla bin Mohammed Ali Al Thani.
2018-01-15
Previous Post: 10 Years Together Dubai Stud
Next Post: Alexxanderr